Below is the performance task for this unit.  Please look specifically at the requirements and the rubric.
Click on the icon below to download a paper version of the document above.

Below is a poem that is annotated, along with a written analysis of it.  Both of these samples would be considered an ES on the rubric. 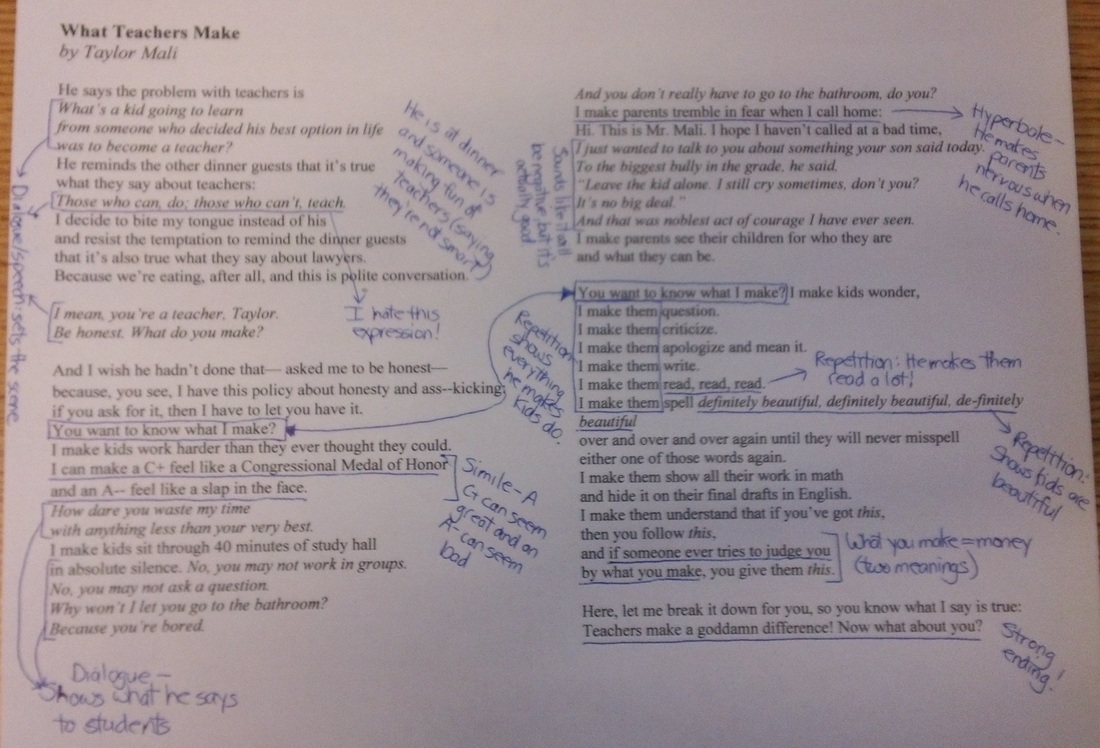 Analysis of “What Teachers Make” by Taylor Mali

In “What Teachers Make,” the speaker of the poem is a teacher who is a dinner party with a group of people and who is defending his profession.  His name is Mr. Mali.

The tone of the poem is slightly angry.  Mr. Mali is definitely angry because he says, “And I wish he hadn’t done that—asked me to be honest—/because, you see, I have this policy about honesty and ass-kicking:/ if you ask for it, then I have to let you have it.”  This means that he obviously is angry at the lawyer and wants to beat him up (verbally, at least).  The speaker also repeats the phrase, “You want to know what I make?” twice throughout the poem.  When people are angry, they usually repeat phrases because they are indignant about it, as if they cannot believe that something was said.  Finally, at the end of the poem, Mr. Mali says, “Teachers make a goddamn difference!!  Now what about you?”  His use of the word “goddamn” reveals his anger.  Also, the fact that he is turning the question around shows that Mr. Mali is trying to throw a point in the lawyer’s face (i.e. that lawyers don’t make any significant difference in the world).

The mood of the poem is passionate.  Readers can tell from the speaker’s words that he is passionate about teaching and that he is passionate about defending it from people who look down on it.  In addition to repeating the phrase “You want to know what I make?” twice to show his emotions, he also says, “…if someone ever tries to judge you/by what you make, you give them this [the finger],” which is an action that most people only do when they are passionately against something/someone.

I think the author’s theme is that people shouldn’t look down on teachers because of how much money they make.  The author is also trying to show that teachers actually do make a lot.  They make a lot of difference in children’s and parents’ lives by educating them and teaching them not only academics but how to be good people.

The author develops this theme throughout the poem mostly by using dialogue/speech, and repetition.  In the beginning of the poem, the lawyer’s words in italics sets the scene properly for Mr. Mali to begin talking about his teaching.  (“I mean, you’re a teacher, Taylor. Be honest.  What do you make?”).  This allows him to begin talking about all of the things that he “makes” as a teacher.  The other instances of dialogue also makes his life as a teacher come alive, because it shows the things that he actually says to his students.  Mali also uses repetition.  As mentioned earlier, he asks “You want to know what I make?” twice.  He also repeats, “I make them…” multiple times in the fourth stanza, emphasizing his point that teachers make students do many things that have nothing to do with money (e.g. question, criticize, apologize, write, read, etc.).   He also says at the end, “Teachers make a goddamn difference!”  His constant use of the word “make” and the way that he uses it reveals the theme that teachers “make” a bigger difference than most people think.