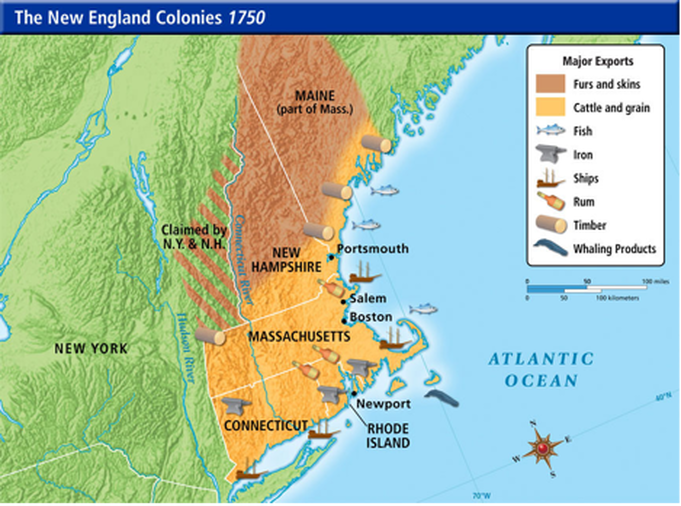 During the Ice Age, large glaciers scraped away all the fertile soil, and moved it south to the middle colonies. These glaciers left a rocky landscape that made farming difficult as well as rocky cliffs in the northern colonies along the Atlantic Ocean. In addition, there was a short growing season because the winter was so long, which meant that farmers usually only grew enough crops to feed their own family. Furthermore, worms and wild animals would often destroy the crops – leaving farmers hungry. However, there were many other natural resources such as lumber (wood) and cod (fish). The forest could provide lumber for New England, which led to a large shipbuilding industry. The Atlantic Ocean had lots of cod, so the fishing industry also grew to be very important. Lumber and cod were also major exports (items sold for trade). 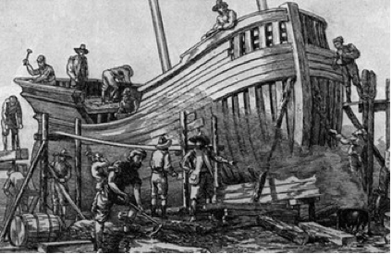 The people of New England were almost completely dependent on their natural resources. They had many small farms, although many people had other jobs. This was because of the poor, infertile soil that made farming difficult. Instead of farming, many people used natural resources and their environment to make money. Due to the easy access to rivers and the Atlantic Ocean, fishing became a large part of life in New England. Using the lumber from the forests, they built homes and ships. Boston, Massachusetts was one of the most significant cities for shipbuilding.

There was much trade between New England and other countries such as England. New England sent useful resources such as fish and lumber to Africa, England, and the West Indies. In return, they received the hardworking slaves from Africa. Many business owners used slaves to work in their shops. 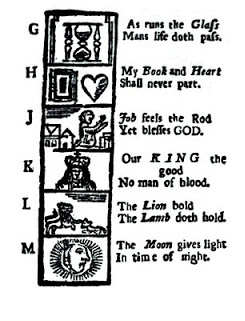 Colonists’ homes were very plain. They had a fireplace, a simple couch, and they had a table where they ate. Many families slept near the fireplace to keep warm in the winter. A few wealthy families had two-story (2 level) homes. Men and boys farmed and did work that required physical power.  Women and girls did most of the household work, such as cooking, washing clothes, and planting and harvesting.

Children learned to read, write, and solve math problems. There were no blackboards for the teachers to write on. There were no pencils. Many schools had no paper. Children read from the Bible and a book called a primer (shown to the left). Sometimes they wrote on a flat piece of tree bark with a feather pen or a lump of coal. 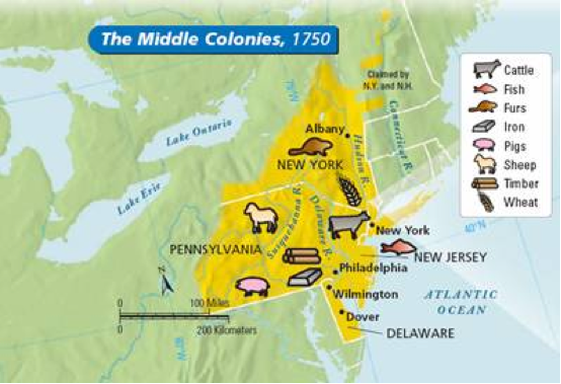 The middle colonies of Delaware, Pennsylvania, New Jersey, and New York were called the “bread basket colonies.”  They had hills and rich soil. Many rivers flowed through this area.  It made transportation and trading easy, especially for farmers who lived inland.  The farmers sent their goods on boats to the big port cities of Philadelphia and New York.

The landscape of the mid-Atlantic was not completely wild land, because the natives had been working and managing the land for a long time before European arrival. But compared to Europe’s crowded streets and fewer natural resources, America looked like a land of plenty. The Europeans quickly used up all the natural resources of the middle colonies with aggressive farming tactics.

Middle colony farmers had an easier time than farmers in New England.  The climate was warmer, with a longer growing season.  The fertile soil was well suited for crops like wheat, fruits, and vegetables.

In contrast to the south where the cash crop[1] plantation system dominated, and New England, whose rocky soil made large-scale agriculture difficult, the middle colonies had fertile soil.  Wheat and corn from local farms would feed the American colonies through the years.

[1] cash crop:  crops meant to be sold to make money rather than being used by the farmer for food
[2] lumbering: cutting down trees for wood

Many colonists lived on small farms and produced crops (wheat was abundant) to sell and to eat.  Other colonists lived in big cities, such as New York or Philadelphia.  Many families planted and ate wheat, corn, barley, pumpkins, rye, flax, potatoes, and peas.  They also ate lots of bread, small game, and raised animals. Houses were made of wood and were generally very small.  Richer families could afford larger brick homes and some colonists lived in log homes.

In the middle colonies, girls and women had to cook, clean, make clothing, soap, butter, and candles, take care of children, and make cloth.  Boys and men had to build and fix things, work in the garden, hunt, make tools, and raise the animals.  Like in New England, children attended a one-room schoolhouse where they were taught religion and prayers, reading, writing, and manners.  When their work was done, women sewed or quilted, and men had shooting contests, foot races, and horse races.  Children played marbles and hopscotch and made kites to fly. 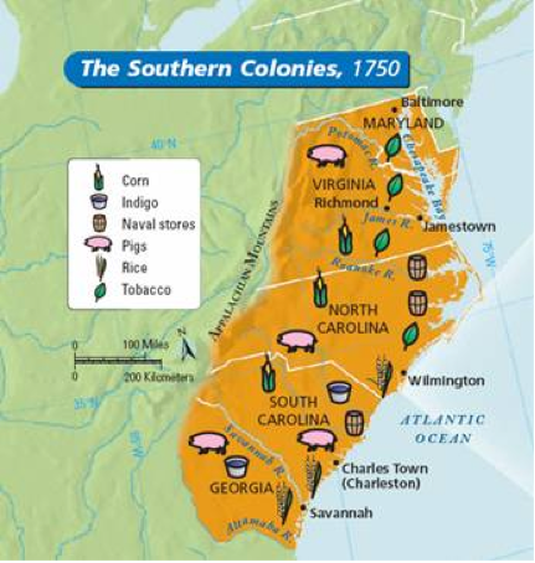 Deep, wide rivers located in the south provided excellent sources of transportation. The rivers were like wide roads for boats, creating many opportunities for trade. Because traders could access many places through water channels, there wasn’t as much of a need to create roads between farms. As a result, the South had less developed road networks than the North. Also, because many people lived and grew crops on plantations[2], people tended to live more spread out, and the South didn’t have many towns or cities.

Colonists who lived far away from the ocean weren’t as lucky as the people who lived on land closer to the water because the soil wasn’t as fertile.  As a result, crops were harder to grow. Instead, they hunted in the thick forests located in the backcountry[3] as a way of making money.


[1] cash crop: crops meant to be sold to make money rather than being used by the farmer.
[2] plantation:  a large plot of farmland.  People who owned the land and people who worked the land lived on houses on this plot.  A large part of the workforce was African slaves, who first arrived in 1619.
[3] backcountry:  land that was cut off from the coast due to poor roads and long distances; very isolated.

The southern colonies had a warm and damp climate, which meant growing plants was easy.  Virginia and Maryland’s major cash crop was tobacco. At the time, there was a large demand for tobacco (a lot of people wanted it) in Europe, and so the crop could sell at a higher price and was mostly grown to sell and trade to Europe. In Maryland and Virginia, at first there was plenty of land to grow tobacco, but not enough people to work on the land (tobacco required a lot of work). To attract more workers from England, wealthy farmers would agree to pay a poor worker’s passage on the ship to the New World in exchange for them working to pay off the price of their passage (this could sometimes take several years of working for no pay). This system was called indentured servitude.

Another way southern colonists got more workers on the farms was through buying and owning slaves. Slaves were considered property of wealthy southern farmers, and usually worked their entire lives without receiving payment. On plantations, they would usually live in shacks or small houses behind a big mansion (house) on the farmland. Children of slaves would also become slaves.

Besides tobacco, there were other popular cash crops in the southern colonies. North Carolina’s main cash crop was wood from the many trees in the area.  South Carolina and Georgia’s main cash crops were rice and indigo. Rice grew well in the hot, wet, coastal regions.  Indigo was a plant that could be used for blue dye. Georgia also grew cotton, which was good for making clothes and other household items.

The children of wealthy plantation owners had easy lives.  They learned reading, writing, dancing, and music.  Boys learned to ride horses and hunt, spending a tremendous amount of time outside.  Older boys were ready to learn how to run the plantation. Girls were taught to sew and sing, and when they got older, they were taught to run a household full of servants. Teachers were paid a lot of money to educate the children of wealthy plantation owners at home.

Life was different for poorer white farmers without plantations.  These farmers usually had only a little bit of land, and they grew enough crops to eat and live off of. Children could only learn to read and write if their parents taught them.  At an early age, they were taught to run the house and farm.  While doing this, they developed skills like hunting, farming, sewing, and cooking.

Enslaved Africans were often treated like animals without intelligence or feelings.  Slaves and their family members were often sold off to different owners.  Husbands and wives were often separated – sometimes being hundreds of miles apart. Slaves worked in the fields or as house servants, performing tasks such as cooking and cleaning.  Young slave children had to work too.  Whether the climate was hot, cold, or rainy, the Africans were forced to work long hours, every day except Sunday.  Masters and supervisors whipped slaves and punished them if they didn’t like what the slaves were doing.  Because of this harsh treatment, many slaves died at an early age.  The remaining slaves struggled to survive. They brought over their musical rhythms from Africa and sang spirituals (chanting songs) together, reminding them of their African culture, traditions, and strength under the hardship of slavery.

Masters felt like it was O.K. to enslave Africans because they weren’t Christians. For the first 100 years of slavery in the southern colonies (until the early 1700s), it was illegal to baptize slaves. Slave owners were afraid they would have to free the slaves if they became fellow Christians, or “brothers and sisters in Christ.” It wasn’t until the 1700s that missionaries[1] from Europe came to convert slaves in the southern colonies to Christianity.


[1] missionaries: religious people who want to convert others to their religion.