Poetry is a way that writers can express their emotions and thoughts.  What separates poetry from prose (the writing that you see in novels) is its form and its words.  Oftentimes, poets use literary devices and descriptive language in order to communicate their thoughts to their readers.  Below are some common literary devices that are used in poems.


"I Wrote Myself A Letter" by Kenn Nesbitt

I couldn't wait to get it. (d)
I nearly had to shout. (e)
I quickly tore the envelope (f)
and pulled the letter out. (e)

1.  Include the poetic devices listed above! 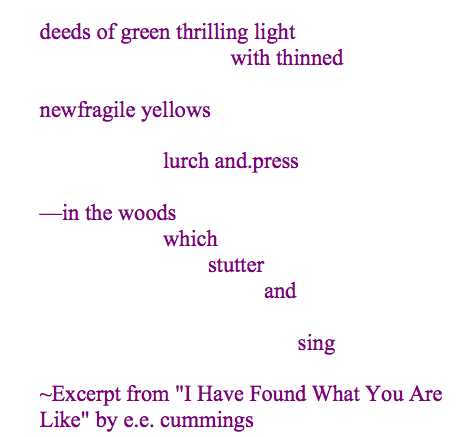 5.  Experiment with punctuation and font size.  For example:

Poems can be free verse, which means that it has no specific structure or rhyme scheme.  But, poetry can also have a very specific form, structure, and rhyme scheme.  Haikus, pantoums, acrostics, sonnets, limericks - these are just some form of poetry that you might want to try.  Look at this website to learn more about the different types of poetry and try to write some of your own using those structures and rules!